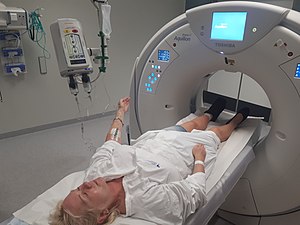 Bolus tracking is where a specified location within the circulatory system is monitored during IV contrast infusion, and the timing of the main imaging is counted from when the contrast reaches this location (sufficiently to achieve a specified threshold).

Washout is where tissue loads radiocontrast during arterial phase, but then returns to a rather hypodense state in venous or later phases. This is a property of for example hepatocellular carcinoma as compared to the rest of the liver parenchyma.[1]

In Swedish practice[2] the standard risk factor questions include presence or absence of:

Decreased renal function and several other conditions increase the risk of contrast-induced nephropathy, which is a potentially lethal renal injury to the kidney following intravenous radiocontrast.[4]

According to European guidelines, the main risk factors of contrast-induced nephropathy:[5]

In case of low GFR, other risk factors need to be checked. Subsequently, the procedure depends on whether the dose that can be given is larger or less than the needed dose.

In a more severe reaction:[6]

Before a contrast CT of a patient with known allergic-like or unknown-type of contrast reaction to the same class of contrast medium (such as iodinated), the American College of of Radiology recommends premedication with a glucocorticoid, preferably starting 12 or 13 hours before contrast administration.[7]

In older patients with multinodular goiter and borderline low or subnormal TSH concentrations, a suggested measure is measurement of thyroid function tests three to four weeks after contrast administration.[8] Limited evidence suggests that antithyroid agents before the investigation may blunt or prevent hyperthyroidism.[8]

Iodinated contrast in pregnancy, when orally administered, is harmless.[9] Intravenous administration of iodinated radiocontrast agents can cross the placenta and enter the fetal circulation, but animal studies have reported no teratogenic or mutagenic effects from its use. There have been theoretical concerns about potential harm of free iodide on the fetal thyroid gland,[9] but multiple studies have shown that a single dose of intravenously administered iodinated contrast medium to a pregnant mother has no effect on neonatal thyroid function.[10] Nevertheless, it generally is recommended that radiocontrast only be used if absolutely required to obtain additional diagnostic information that will improve the care of the fetus or mother.[9]

American College of Radiology guidelines state that iodinated contrast administration to a breastfeeding mother is considered safe for both the mother and child.[11] Still, mothers who remain concerned about any potential adverse effects to the child are recommended to have the option of abstaining from breastfeeding for 24 hours, with continued milk extraction such as by a breast pump during that period.[11] Mothers that opt for this for non-emergent exams may also use a breast pump to obtain milk before the exam in order to feed the child during the 24-hour abstinence period.[11]

Depending on the purpose of the investigation, there are standardized protocols for time intervals between intravenous radiocontrast administration and image acquisition, in order to visualize the dynamics of contrast enhancements in different organs and tissues.[12] The main phases thereof are as follows in table below.[13]

CT angiography is a CT scan corresponding with contrast filling one or more blood vessels of interest.

See CT#By location (CT with IV contrast, including CT angiography, is organized as other CT examinations).