Radlines is currently the only member wiki of Prowikis, which is a non-profit organization aimed at the creation and technical maintenance of profession-specific wikis.

Dr Mikael Häggström is from Uddevalla, Sweden, and graduated from Uppsala University, Faculty of Medicine in 2013. He is currently a resident physician at the radiology department at the NU Hospital Group. 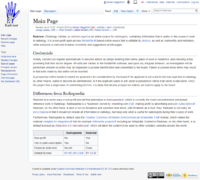