The kidney is divided into parenchyma and renal sinus. The renal sinus is hyperechoic and is composed of calyces, the renal pelvis, fat and the major intrarenal vessels. In the normal kidney, the urinary collecting system in the renal sinus is not visible, but it creates a heteroechoic appearance with the interposed fat and vessels. The parenchyma is more hypoechoic and homogenous and is divided into the outermost cortex and the innermost and slightly less echogenic medullary pyramids. Between the pyramids are the cortical infoldings, called columns of Bertin (Figure 1). In the pediatric patient, it is easier to differentiate the hypoechoic medullar pyramids from the more echogenic peripheral zone of the cortex in the parenchyma rim, as well as the columns of Bertin (Figure 2).[1] 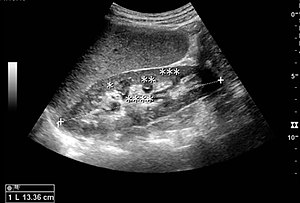 Cortical thickness should be estimated from the base of the pyramid and is generally 7–10 mm. If the pyramids are difficult to differentiate, the parenchymal thickness can be measured instead and should be 15–20 mm (Figure 3). The echogenicity of the cortex decreases with age and is less echogenic than or equal to the liver and spleen at the same depth in individuals older than six months. In neonates and children up to six months of age, the cortex is more echogenic than the liver and spleen when compared at the same depth.[1] 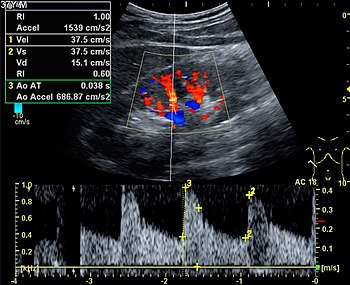 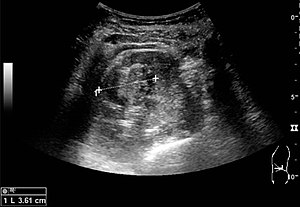 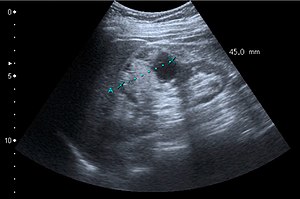 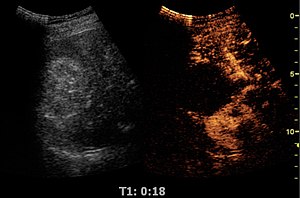