A fibrin sheath of central venous catheter (including PICC-lines and implanted ports) can be suspected when it is possible to inject into it but not to aspirate.

X-ray of central venous catheters is enough to check position after insertion, or in suspected movement.

A suspicion of a thrombotic occlusion of the vein passed by the catheter indicates a CT angiography.[2]

The total amount of contrast is rather small (5-15ml) so a decreased renal function does not need to to be a contraindication.[2] 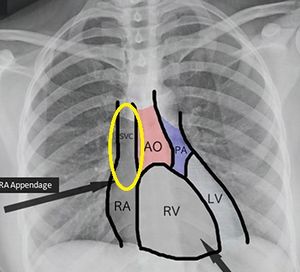 For catheters positioned to low or high, estimate the difference between the current and optimal placement.

Regular catheters:
The distal tip of jugular catheters should lie in the lower part of the superior vena cava.[3] For left-sides catheters, a tip in the upper right atrium has also been suggested.[3] However, the cardiac silhouettes are regarded as not reliable for this purpose, compared to using the carina as a landmark.[3] Hence, a catheter tip between 55 and 30 mm below the level of the carina is regarded as acceptable placement on anteroposterior X-rays.[4]

In a normal case, the contrast flows straight out from the catheter.[2] Contrast flowing at a skewed angle compared to the catheter is regarded to be a suspected fibrin sheath.[2]

A definite fibrin sheath is visualized as contrast flowing backwards around the catheter, looking like a thickening of the distal part, before exiting at a more proximal part of the catheter. Preferably note the distance between the catheter tip and the exiting point, and whether it is in a different vein (such as the brachiocephalic vein). 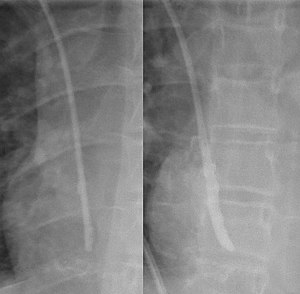 The fibrin sheath is indirectly seen in these images before and after radiocontrast injection, as the radiocontrast collects around the catheter.

The report may very well be a chronological description of the procedure, and should include:

Optionally, if tested or measured: